As I've been informed that the Corporate Research Associates do not poll in the last week of an electoral campaign, it appears that our unexpected but welcome bounty of New Brunswick polling has come to an end. It remains to be seen whether Abacus's poll from yesterday (which was reported on in the Telegraph-Journal today) will be the last of the campaign.

So, instead we have a poll from Angus-Reid on the provincial political situation in Manitoba. It looks like there could be a change of government when the next election rolls around in October 2011. 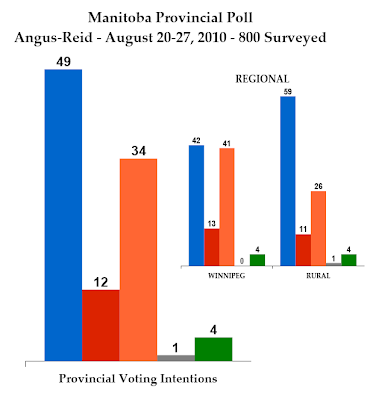 But compared to Angus-Reid's last poll in June, there hasn't been much of a change. The Progressive Conservatives under Hugh McFadyen have gained one point and stand at 49%. The New Democrats, under Premier Greg Selinger, have lost two points and are down to 34%. That is a large 15-point gap, far larger than the 10-point gap that re-elected the NDP under Gary Doer in 2007.

Jon Gerrard's Liberals are stuck at 12%, while the Greens are up one to 4%.

As is the case at the federal level with the Conservative Party, the Progressive Conservatives in Manitoba have a big lead among men (53% to 34%), but the race is much closer among women (45% to 35%).

The race is close in the provincial capital, with the Progressive Conservatives edging out the New Democrats 42% to 41%. The Liberals are well behind at 13%.

But in rural Manitoba, the Progressive Conservatives dominate. They lead with 59%, while the NDP lags behind with 26%. 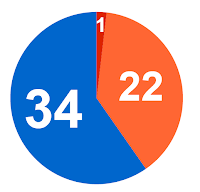 With this poll, the Progressive Conservatives would win a majority government with 34 seats. The New Democrats would form the Official Opposition with 22 seats, while the Liberals would elect only one MLA.

While the Liberals have gained no ground since 2007, there has been a lot of movement at the top between the PCs and the NDP. The NDP has lost about 14 points, which is a serious personal indictment of Greg Selinger. Gary Doer was well liked in the province, but the NDP has tanked since he went off to become ambassador to the United States. The Progressive Conservatives are really flying high, especially when you consider that the party has never had this much support since the 1977 election.

With only a year to go, it appears that the New Democrats will not be re-elected to a fourth consecutive term. But, as always, things can change in a heartbeat in politics.
Posted by Éric at 10:05:00 AM