BC New Democrats still in front

Earlier this month, the Mustel Group released a new poll on the provincial situation in British Columbia. We haven't heard from them since May, but it appears that very little has changed over the summer on the West Coast. 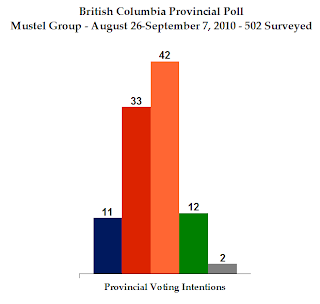 Compared to that May poll, the BC New Democrats have lost two points and now stand at 42%. The BC Liberals are up one to 33%. Of course, these small variations are well within the margin of error, so we might as well say that both parties held firm during the last four months.

The BC Greens have dropped one to 12% while the BC Conservatives are up four to 11%. They seem to have benefited from the lack of options among the two front-runners, as the BC NDP has not been entirely inspiring in the opposition.

Nevertheless, the New Democrats lead in Vancouver and on Vancouver Island, but are running neck-and-neck with the BC Liberals in the Vancouver suburbs and the BC Interior. 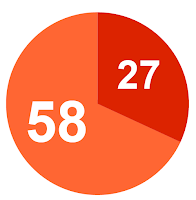 The BC New Democrats would win 58 seats with this poll, while the BC Liberals would form the opposition with 27.

Campbell's approval rating was an abysmal 28% in May, while his disapproval rating was at 61%. The gap has narrowed, however, as he now has a 34% approval rating compared to a 57% disapproval rating. Those are still bad numbers, but whereas in May he was far less popular than his own party, he is now slightly more popular. James' rating is also similar to her party's standing. This indicates that neither Campbell nor James is acting as a boon or dead weight for their respective parties.

Unless something radical happens between now and then, the next election in British Columbia will not be held until the spring of 2013.
Posted by Éric at 1:42:00 PM