Today's TJ/CRA poll puts David Alward's Progressive Conservatives at the lofty height of 50%. The party is fully in control now, but with 12 days left in the campaign, can they hold on to their lead? 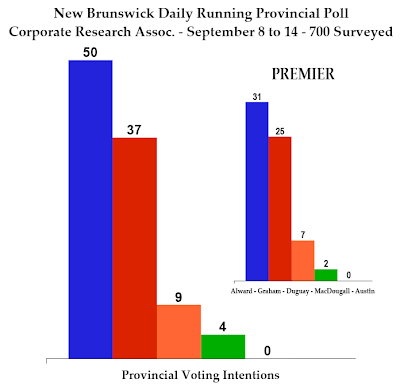 This is a gain of one point for the party, and the gap between them in the Liberals is now 13 points. They are unchanged at 37%. The New Democrats are down a point to 9%.

While the first round of debates took place on September 14, I don't think we will start to see any "debate effect" until tomorrow.

An interesting thing to note about this poll is that the amount of undecided voters has been reduced to 21%. It is still a significant amount, but remember that the number of undecideds was more than 2 in 5 at the beginning of the campaign. 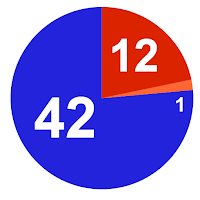 With this 13-point gap, the Progressive Conservatives would have an easy time of it, electing 42 MLAs. The Liberals would elect 12 and the New Democrats one.

David Alward is now the choice for Best Premier of 31% of New Brunswickers, up two from yesterday. Shawn Graham is up one to 25% while Roger Duguay is holding steady at 7%. Jack MacDougall and Kris Austin are down one point apiece to 2% and less than 1%, respectively.

Taking out the undecideds and none-of-the-aboves, that gives Alward 48%, Graham 38%, and Duguay 11%. While Graham started the campaign less popular than his own party, that seems to have changed.

The Progressive Conservatives are still projected to win 29 seats, while the Liberals are up to 25, one more than yesterday. That seat gain came from the NDP, who is back down to one seat. 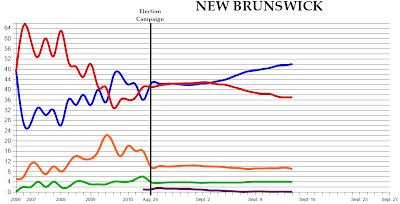