The Telegraph-Journal and its daily tracking poll from the Corporate Research Associates now has the Liberals up two points over the Progressive Conservatives, who have yet to show any life since the beginning of the campaign. 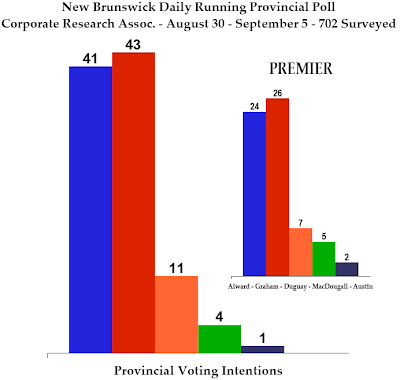 At 43%, the Liberals have been steady for several days now. But the Progressive Conservatives are down one point to 41%. While the margin of error is still 3.7 points, this means the parties are tied. But the trends aren't in David Alward's favour.

The New Democrats pick up the extra point, and now stand at 11%. The Greens and People's Alliance are unchanged at 4% and 1%, respectively, while undecideds still number 28% of the electorate. There is still a lot of campaigning to be done.

While Shawn Graham's Premier number is down one to 26% (and down three from the start of the campaign), Alward is also down one, to 24% (down two since September 3). Again, it is the NDP's Roger Duguay who makes a gain, but only of one point. He stands at 7%, while Jack MacDougall of the Greens and Kris Austin of the PANB are at 5% and 2%, respectively. 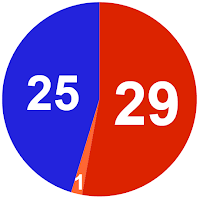 The Liberals would win 29 seats with this poll, up one from yesterday. The Progressive Conservatives are down to 25, while the NDP remains at one seat.

The projection, as I've said, will not change until Thursday at the latest. That is because Thursday's CRA poll will include seven new days of polling that do not overlap with the current CRA poll in the projection. Of course, if another pollster comes forward with some polling numbers for the New Brunswick election, I will update the projection.

From the chart below, you can see that the Liberals are on a slow upswing at the expense of the Progressive Conservatives. If the numbers continue to move in this direction, Graham will cruise to his second term as Premier. 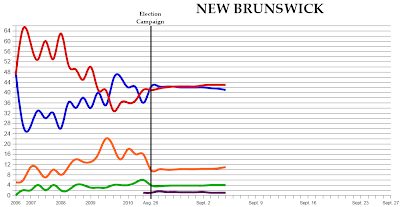