Progressive Conservatives tie it up

The Telegraph-Journal and CRA's daily tracking poll shows that the Progressive Conservatives have tied up the New Brunswick electoral race. Both they and the Liberals are now at 43%. 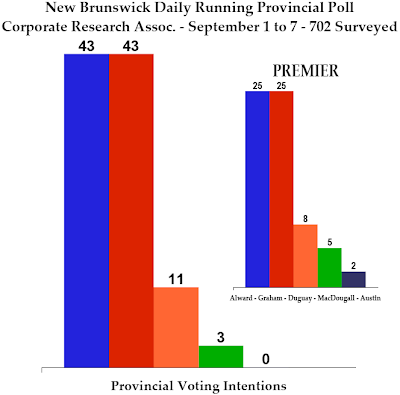 Compared to yesterday, that is a two point gain for the Progressive Conservatives. In the context of this daily tracking poll and how immobile it has been, that is huge. Are they on the upswing?

The Liberals and New Democrats (11%) are unchanged. The Greens have fallen to 3% (down one) while the People's Alliance has fallen to 0% (down one). Undoubtedly that is a "rounding down" result.

With less than three weeks to go in the campaign, 26% of New Brunswickers remain undecided. How they fall will decide the next government. 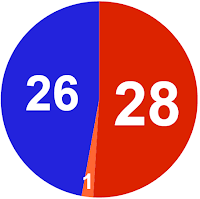 David Alward and Shawn Graham are tied at 25% for Best Premier. The race really is very close. Roger Duguay has picked up another point and is now at 8%. Jack MacDougall of the Greens and Kris Austin of the People's Alliance remain at 5% and 2%, respectively.

Taking out the undecideds and "none of the above", as is done for the voting intentions poll, we get 38% each for Graham and Alward, 12% for Duguay, 8% for MacDougall, and 3% for Austin. This indicates that a good number of New Brunswickers, perhaps 10%, want to vote for the smaller parties but consider it useless. How else to explain Graham and Alward's standing five points behind their respective parties. One bit of good news, for the New Democrats at least, is that virtually all of the support for Duguay is translating into voting support - in other words, an NDP vote isn't seen as a waste in the way that a Green or PANB vote is seen.

The voting intentions chart inches along, mostly unchanged because NO ONE ELSE IS POLLING. This is the problem when most of the media in an electoral campaign is owned by one conglomerate. No one else is around to hire a pollster. 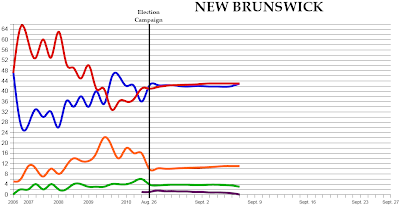